Sri Lanka – Taprobane of the Greeks, Serendib of the Arabs, Ceylon of the Europeans – according to its chronicles, has been an independent Kingdom since its establishment on the very day on which the Buddha passed away from the earth and attained Nirvana, 483 B.C. Coincidentally, this is the same day on which Vijaya, a refugee Aryan prince from India is thought to have landed in Sri Lanka and set up the kingdom on the North central plain of the island. The island’s ancient inhabitants are supposed to have been devils and demons – aboriginal tribes called Yakhas and Nagas. 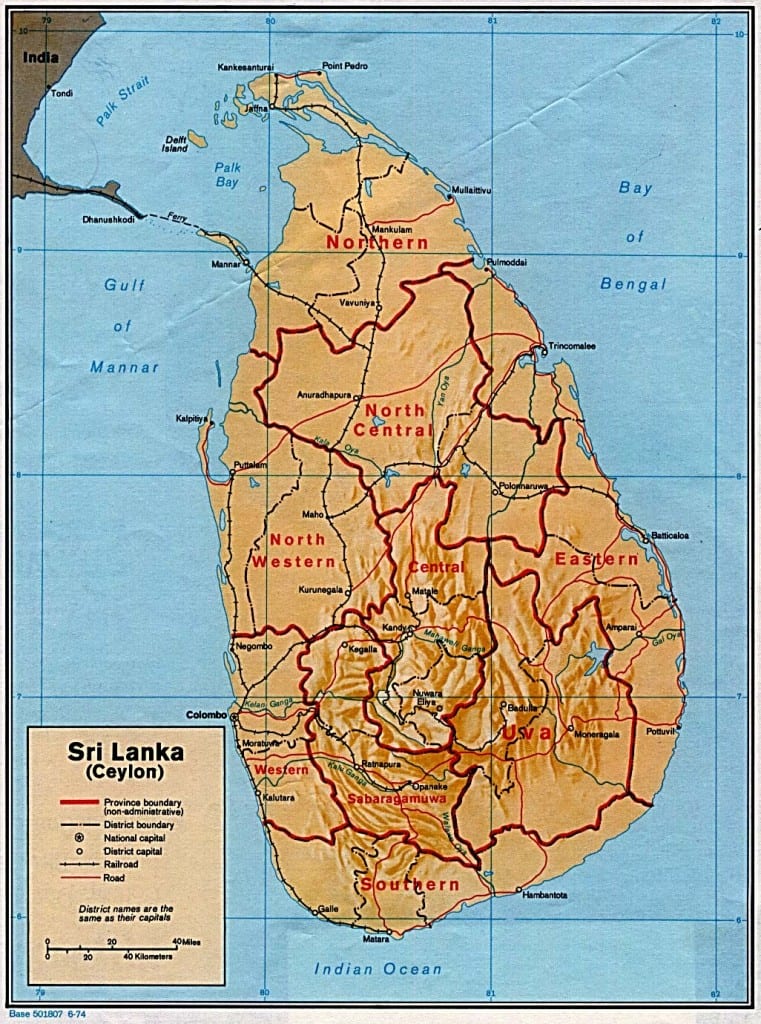 The island was subject to a series of major invasions and minor forays from various South Indian dynasties during the Anuradhapura and Polonnaruwa Kingdoms (periods) up to the 12th century. The capitals were shifted to the hill country on several occasions, culminating in the last Kingdom of Kandy in the 16th century.

With the capture of the King of Kandy on 19 February, 1815, the island of Sri Lanka lost its independence, “an independence which had continued without any material interruption for 2,357 years” as the legend, interlaced with history, continues to have it. It is important to remember that Sri Lanka has the most impressive chronicle record of its history backed by epigraphical evidence in South Asia.

The British rule of the entire island of Sri Lanka, which began in 1815, ended only on 4 February, 1948 with the grant of independence. Some politicians and certain observers consider the transfer of power that took place in 1948 as a spurious form of independence on the grounds that political freedom without economic freedom is in reality a hollow freedom. In 1948, in other words, this island merely ceased to be a British colonial possession. On several fronts – defence and economics to name but two – Sri Lanka continued to be heavily dependent on Britain.

In any assessment of the political development of Sri Lanka, one significant fact emerges of which serious note has to be taken. This is the fact that Sri Lanka was the first country in Asia in modern times to introduce adult suffrage in 1931 – well over a decade and a half before independence. There have been several low points – notably during the life of the governments of 1970, 1977 and 1980 – in Sri Lanka’s post independence democracy to-date. The fact that the centre held despite these upheavals is attributable in large measure to the political consciousness and maturity of the Sri Lankan electorate. The capacity of the masses for extra parliamentary agitation stems largely from their early experience with democratic politics.

As a former colony of Britain it was perhaps natural for Sri Lanka to adopt the British political model but unlike Britain, Sri Lanka had no tradition of Parliamentary Government. There was a form of popular government in local affairs, but no monarch of Sri Lanka ever consulted duly constituted representative bodies at the centre over issues of general governance. Sri Lanka has a predominantly rural population, which is agriculture-oriented and heterogeneous in composition. Economically, Sri Lanka is an underdeveloped or developing nation. There is a multi-party system although the Sri Lanka Freedom Party (SLFP) and the United National Party (UNP) are the dominant political entities.

The economic status of countries like Sri Lanka in the contemporary world leaves much to be desired. Foreign financial capital yet has a controlling power over the Sri Lankan economy through such spheres as “aid”, Banking, insurance and the tea trade. In today’s uni-polar world the economic climate is even harsher than before and small, resource-poor states like Sri Lanka are likely to become increasingly dependent on foreign capital for survival. In this regard the fact that Sri Lanka was the first country in South Asia to modernise its economy post-1977 and adopt a liberalised economy may prove advantageous in the long run. Misguided and politicised trade unionism, a hangover from the 1950’s, unless checked, may hamper economic development.

Despite the brutal and costly civil war that rages in the North and East of the island, Sri Lanka has managed to keep its economy steady and, generally speaking, the island nation is able to boast of a quality of life that compares very favourably with developing nations of Asia.

The People and Communities of Sri Lanka

The structure of Sri Lankan society itself contributed to some of the nation’s past and contemporary problems. In today’s Sri Lanka the problems arising from caste differences are no longer as much a threat as those arising from religious and ethnic rifts and divisions.

The Sinhalese, who form the majority community, are divided not only by caste differences but also by religious and other cultural distinctions. Although the vast majority of the Sinhalese are Buddhists, there are the Christians among them who, though much fewer in number are, as a spin-off of colonial policy, socially more powerful and influential in inverse proportion to the numerical strength. The division between the “up-country” and “low-country” Sinhalese, surprising as it may seem, is a factor to be reckoned with even in this day and age!

The Tamils of Sri lanka consist of two groups – Sri Lankan and Indian. They are predominantly Hindu but there are Christians among them as well. Among the Hindus – whether they be Sri Lankan or Indian Tamil – the ancient caste system operates with greater rigidity than among the Sinhalese. The continuing war between the Sinhalese and Tamils of Sri Lanka has resulted in the migration of many Tamils to all corners of the world in recent years. The Tamils, in proportion to their numbers, in the early years following I
Independence came to dominate the public sector and the learned professions of Sri Lanka because of greater educational opportunities. The Indian Tamils who form the bulk of the population in the tea plantation areas in the central highlands occupy a vital place in an important sector of the Sri Lankan economy. The other Indian Tamils are for the most part traders and shopkeepers. Sri Lanka, as noted above, has an under-developed economy basically capitalist and therefore highly competitive with limited employment opportunities. Given the reality, it should come as no surprise to note that one of the major social and political problems of our times, to put it mildly, has been and continues to be the tensions and frictions between the Sinhalese and Tamils of Sri Lanka.

The Muslim community, a much smaller section of Sri Lankan society than the Tamil, is differently placed in relation to the Sinhalese. They fall, broadly speaking, into three groups. First, there are the Sri Lankan Moors whose connections with the island go far back into its history to the time of the arrival of their forefathers as traders. The second group consists of the Malays who appear to have originated from the Javanese regiments, which were brought over by the Dutch in the 17th and 18th centuries. The third comprises those Muslims of the Eastern Province who have pursued an agrarian way of life and who for generations have been agriculturalists in the rural hinterlands of that province. The Muslims, the 1915 riots not withstanding, have unlike the Tamils not been in acute competition or rivalry with the Sinhalese in recent times. One of the present dangers however, especially in the Eastern Province, is the increasingly fractious, generally uneasy, often acrimonies and potentially explosive relationship between the Tamils and the Muslims.

Sri Lankan Burghers – the descendents of the Portuguese and Dutch – and a handful of North Indian traders – Gujaratis, Borahs and Parsis – are also a part of the Sri Lankan social mosaic.

To add to the social divisions based on caste, ethnicity and religion there continued to be in post-British Sri Lanka two other significant socially divisive tendencies which had their origins in British rule and which cut across caste and ethnic distinctions. One is the class distinction, a product of the emerging capitalist economy and the social order that the British helped to bring about, and the other, closely related to and interwoven with the concept of class, is the English language.  Sri Lankan society came to be – and continues to be – divided into two clear-cut groups on the basis of English and these are its English-speaking and the Swabasha or indigenous language speaking segments.  The former is made up of those belonging to the western-oriented middle class of urban Sri Lanka. A good percentage of the Christians, especially those of the Protestant persuasion, belong to this group. British rule produced an English educated class of about 6% of the nation’s population, not surprisingly, it was this small coterie which in effect monopolised the best jobs in both the government and the mercantile or private sectors of Sri Lanka, apart from dominating the professions. Although its numbers have dropped significantly due to the migration of a sizeable segment of this class to “greener pastures”, the English speaking class continues to remain in a dominant position to-date.

The introduction of English as a medium of instruction in education resulted in the growth in Sri Lanka of an English educated “elite” which was, in realty, a very small segment of the society as a whole. In a heterogeneous society such as Sri Lanka is, this elite was drawn from all ethnic groupings and English education for a brief period seemed to be the unifying influence in post-British Sri Lanka. The inability, however, of the political leadership of independent Sri Lanka to extend the benefits derived from familiarity with and a command of the English language to a wider segment of Sri Lankan society in combination with the ruthless exploitation of the explosive potential of the politics of language (Sinhala/Tamil) for narrow political gain led in the main to the bitter and brutal reality of the ethnic war of today.

The introduction of free education in 1944 helped, at first, significantly to redress the imbalance between the socially privileged and other. As years went by and the demand for education grew dramatically, the state could not meet the rising expectations of the rural intelligentsia. The aspirations of the poor and the marginalized in particular were, by and large, not met. The take over or the nationalisation of schools perpetuated the distinction between state and private schools (fee levying and non-fee levying). That free education enabled new social layers, both urban and rural, hitherto deprived of educational opportunities to obtain a place in the sun is undeniable.  The introduction of the mother tongue as a medium of instruction and later Sinhala as a state language in 1956 also had their positive impact on the Sri Lankan polity. The gains, however, were short-term. The unpardonable lapse of not according to the Tamil language in 1956 the status conferred on Sinhala that year and the failure to implement a sound island-wide English teaching programme served to undermine the early success of the free education system and the initial benefits derived from it could therefore not be sustained. The inability of the state to meet the high expectations engendered by the grant of free education resulted eventually in the youth revolt of 1971 led by the more literate and articulate members of the educated peasantry. These “beneficiaries” of free education could not find gainful employment commensurate with their educational attainments and the high hopes based on those attainments. The resultant frustration and despair led to revolt.