The Christian Solidarity Movement has expressed their surprise over the silence observed by the Catholic Bishops Conference in Sri Lanka over the derogatory remarks that are being produced against Mannar Bishop Rev. Rayappu Joseph blessing the common Opposition candidate Maithripala Sirisena. 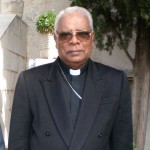 The CSM releasing a media statement over the remarks that have been produced by particular major government Ministers as effectively as in state media more than Sirisena meeting Bishop Joseph on December 30 to seek his blessings, has pointed out that when President Rajapaksa too approached the very same Bishop for the exact same goal no problem was raised and neither have any remarks getting produced branding him as the &#8216Tiger Leader&#8217 or the &#8216Tiger Bishop&#8217.

Although expressing their concern over the verbal attacks that have been launched by the politicians, the CSM has called for a clarification on whether the views expressed by such politicians is reflective of the government&#8217s point of view.

In addition the CSM has pointed out that these comments are an indication of the abysmal depths that the regional politics have fallen into due to the entry of undisciplined and uneducated persons entering politics.

The CSM has also urged the Bishops Conference to raise the concern at the national level and to stand by their fellow brother Bishop who has been the &#8216voice of the voiceless&#8217 for the people of Mannar as properly as the entire of Sri Lanka.

We publish under the letter in complete

Derogatory remarks made about Bishop Rayappu Joseph of Mannar diocese.

Widespread opposition candidate Mr. Maithripala Sirisena on an election campaign to the north met the Mannar Bishop Rayappu Joseph on 30 December and sought his blessings in view of the January 08 presidential poll. This occasion was then utilised in the government electronic media as an advertisement in a very uncouth manner, throwing derogatory comments about Rt. Rev. Rayappu Joseph that it was from the ‘Tiger Leader’ that the widespread candidate Mr. Maithripala Sirisena received blessings for the forthcoming presidential election.

However, a couple of days later the President Rajapaksha as well approached the very same Bishop for the same objective but there was no such a remark created by any individual about a ‘tiger bishop’ blessing the incumbent President.

We, Christians and concerned folks, are disturbed and perturbed more than Bishop of Mannar being the object of a verbal attack of a personal nature launched by the politicians with self interest at this crucial juncture of our history. A clarification is now needed regardless of whether the views expressed by such politicians is reflective of the Government’s point of view.

We get in touch with on politicians to quit the harassment of Bishop Rayappu immediately. Unlike the most politicians who have served themselves than their people, Bishop Rayappu Joseph has fostered common good, the spirit of humanism and human rights. We like to reiterate that Bishop Joseph has looked after his flock – not just Catholic Christians, but Christians of all denominations, non-Christians, and other folks. He is not only the leader of the Catholic diocese in Mannar, but a humanitarian, who had stood for the rights of all Sri Lankans.

Generating such vulgar accusations on a religious leader merely to acquire political mileage is quite unethical. It is an indication as to what an abysmal depth our politics have fallen into, due to the entry of the undisciplined and uneducated persons into politics.

We as the CSM condemn the uncouth and unethical remarks about Bishop Rayappu, created by a single of the major government ministers as soon as once more at the final rally held at Kesbewa in help of the incumbent President.

At the same time we are surprised to note the silence observed by the Catholic Bishops’ Conference in Sri Lanka on this matter. We urge the Bishops’ conference, to raise this situation at the national level and to stand by their fellow brother bishop who had been the ‘voice of the voiceless’ people of Mannar and in the complete island of Sri Lanka.