In an appalling show of his close affiliations with the Rajapaksas, de facto Chief Justice Mohan Pieris has stated in Courts these days that the ‘only individual who knows every thing is the Secretary to the Ministry of Defence Secretary. 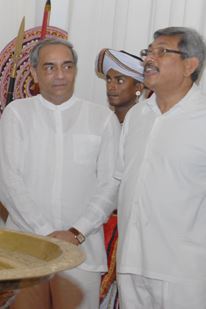 This remark had been created by Pieris today throughout the hearing of a Basic Rights application (No: 414/14) where a group of Agricultural engineers/professionals had challenged the new service minutes, pointing out it has deprived them of getting promoted to higher positions in the Agricultural Department due to being forced to remain portion of the Sri Lanka administrative service.

While the case was being heard, Pieris had told that he is properly conscious and knowledgeable on solid waste management and agriculture and had gone on to criticize the engineers, calling them ‘useless’. At this point, the lawyer appearing on behalf of the petitioners, Manohara De Silva had pointed out the de facto CJ should not let his personal information interfere with the ongoing case although adding that the only information that should be applied is legal expertise.

Even so, Pieris had dismissed De Silva’s statement adding that as a judge, he has the power to refer to his individual expertise as effectively.

As the hearing proceeded, specific comments had been made on the Colombo Municipal Council, which is not at all relevant to the case that was becoming heard. However, Pieris had continued to comment on it as he moved on to speak about the Sathutu Uyana fund, which he had claimed was initially mismanaged but is now in right hands of MOD Secretary Gotabaya Rajapaksa.

“The only person who knows almost everything is the Defence Secretary. He also knows about waste management,” the de facto CJ had stated shamelessly violating skilled ethics and the independence of the judiciary. Manohara de Silva had responded to this claim stating, “But I do not want him to do the job of my customers.”