Dayan Jayatilleka’s Long War, Cold Peace – Conflict and Crisis in Sri Lanka’ appears at a moment in history when Sri Lanka stands at a crossroads.The war is over but there is yet a crisis of reconciliation and a crisis of state to be resolved, and so a stable peace still eludes us. These are the issues that Jayatilleka primarily worries about in his new book. It runs into several sections and sub sections on the historical record of how we came to be where we are. 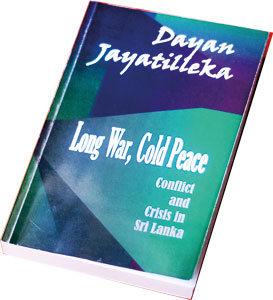 The Tamils for their part have failed to make a clean break from their recent past of support or sympathy for secessionism and terrorism.There is no post war discourse which combines a strong position in defence of the war with a strong drive for a sustainable peace on a new basis of a fairly redrawn ethnic compact. This is the crisis of post war consciousness and discourse.”

It is in this important area that the book makes its main contribution — one of its objectives, by the author’s own admission in the preface, being to provoke the debate and discussion that is needed. ‘Long war, cold peace’goes headlong into the narrative without detaining the reader with the niceties of a foreword or intro written by some other scholar etc. If the book comes across as having been produced in a hurry, it is because it was.

The author and publisher (Vijitha Yapa) were keen to “send the manuscript to the press in time for the March 2013 session of the UN Human Rights Council and the discussion on the event.”

The book combines documentary, analysis and opinion (at times all rolled into one) drawing on the author’s multifaceted experience as a political scientist, academic and diplomat. He was also briefly a minister of the ill-fated North East Provincial Council (NEPC) formed in 1988 under EPRLF’s Varadharajah Perumal. Chapter three(‘Conflict and Negotiations’) that deals with the formation of the NEPC and the reasons for its failure is one of the book’s most detailed and nuanced sections. This is no doubt owing to the author’s degree of proximity to and involvement in the events chronicled.

Starting from the genesis of Tamil separatist violence this section traces the trajectory of the Eelam Left, the shifting balance of power between its constituents, the LTTE’s rise to pre eminence,the bloody serial massacres tha teliminated its rivals, the Indo Lanka Peace Accord of July 1987, the developments leading up to the outbreak of war between the Indian Peace Keeping Force (IPKF) and the LTTE in Oct 1987, the formation of the NEPC and the factors leading to its eventual collapse.

The seemingly intractable interplay of forces at different levels – inter-state as well as intra-state, is made comprehensible,aided by reference to the “unchronicled and undocumented processes that were going on at that time.”

‘Long war, cold peace’ does not pretend to be a complete historical account of the war, and its narrative does not proceed in a straight line. While it deals withthe important landmark events and issues(the Eelam wars, July 1983, the Indo Lanka Accord, the Ceasefire Agreement, the P-TOMs, the military victory over the Tigers, post war politics, the international dimension) the book’s interest lies more in the author’s analytical approach and ability to place things in perspective.

There is an ethical dimension to the discussion that runs through it like a sub text, and this is where the book’s appeal would lie for those with a philosophical turn of mind. The author’s encyclopedic familiarity with political theory,conflict situations and armed struggles elsewhere in the world allows him to make comparisons at every point (Columbia’s FARC, Central America’s FMLN and URNG, the MNLF in the Philippines, SPLA in Southern Sudan, the PLO and the IRA).This constant cross-referencing helps the reader to understand the particularities of Sri Lanka’s crisis and its manifestations. It also helps to separate criticisms that are valid from those that are not.

In the latter part of the book that deals with the international dimension, Jayatilleka refers to the ongoing discourse on war crimes and says “the assertion that the endgame that actually took place needs to be investigated as a war crime” is baseless.The reasons he gives, briefly are, firstly, the Tigers were a fascist force that had to be decimated. Secondly the Sri Lankan forces had to operate according to a tightening timetable not of their own choosing. Thirdly at no time were civilians wittingly targeted as a matter of policy, nor were they boxed in and deprived of an exit by the state.
In no way does this argument amount to a dismissal of human rights as “a Western invention or booby trap.” Though there are constant attempts to use human rights to undermine national sovereignty, Jayatilleka pleads that the answer is not to shun human rights but to protect them ourselves.

It is imperative to realise that the international pressures “are a symptom and byproduct of something that has gone wrong in our external relations and our ability to communicate with the world.” The only real antidote against these pressures he argues is to have “strong, credible, NATIONAL institutions and mechanisms.”The author offers pointers as to how, in his opinion, the crisis of reconciliation can be resolved. Central to that project is his belief in the 13th Amendment and the urgent need for devolution of power.

If this book has an ‘unfinished’ feel to it, this is probably not unrelated to the fact that the conflict itself remains ‘unfinished’. Having been rushed to press, the manuscript’s main weakness is an element of repetition, duly apologised for in a note by the author. Some sections have been drawn from his previous publications. This creates a certain unevenness in the text, as the reader has to constantly shift gear so to speak, adjusting to varying levels of intensity of analysis and slightly different stylistic approaches adopted in different sections.

However, consistency of philosophical approach is maintained throughout and this gives the work a binding coherence.’Long war, cold peace’ may be a bumpy ride, but worth it for the reader who, at the end of the journey,will arrive at a better understanding of the most urgent issues of our time.

*This article is first appeared in Sunday Times Sri Lanka