“The government has turned us into orphans in our personal motherland.”

Gotabaya Rajapaksa’s most recent beautification project, the Weras-Ganga Improvement, with walkways and a food court, was declared open with considerably fanfare this month. Jackson Anthony, dramatist turn sycophant, used the occasion to proclaim that the time has come to upgrade Mahinda Chinthanaya (Mahinda Believed) to Mahindavādaya (Mahindaism – Mahinda Ideology)[i]. 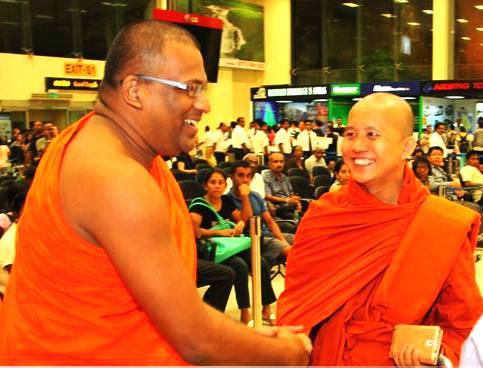 For a lot of farmers of Boralesgamuwa (as for most Tamils and Muslims and growing numbers of Sinhalese), Mahindavādaya has turn into a Mahinda-Vadaya (Mahinda-Affliction). Their fields could not be cultivated for two seasons because they did not have access to the usual supply of water thanks to the beautification project. Now they are becoming told by the military how they need to cultivate their fields. Lacking the money and the manpower to follow military instructions, the farmers have given up cultivation. They say that if they are unable discover “labouring jobs to feed their households, they will just have to die, even though watching the moneyed ladies, gentlemen and their households promenading and enjoying themselves”[ii].

In February 2010, chief prelates of all 4 chapters decided to hold a specific Sangha Convention on Democracy and Governance. Gen. Sarath Fonseka had been arrested and the monks planned to officially request the government to cease persecuting the war-winning army commander.

The Rajapaksas went into panic-mode. This was not some minor gathering, but a convention bringing collectively representatives of the complete Sangha Sasana. State media heaped vitriol on the Convention even though frenzied efforts were produced behind the scenes to cancel it.

At the eleventh hour the Convention was cancelled. Afterwards, Ven. Athangane Ratanapala Thero told the media that the head of the Malwatte Chapter had been beneath ‘severe stress’: “Many members representing the government as properly as some members of the clergy who are working for the government used tremendous pressure on us to cease the meeting”[iii].

The Chief Incumbent of the Mihintale Raja Maha Vihare was much more explicit. He said that a group of 45 Buddhist monks visited the Malwatte Mahanayake Thero and informed him that he would “have to take the responsibility if two or 3 bombs went off within the premises of the Temple of the Sacred Tooth Relic”. He also named names: “Chancellor of Kelaniya University, Ven. Dr. Welimitiyawe Kusaladhamma Thero, former parliamentarian Ven. Uduwe Dhammaloka Thero, Ven. Diviyagaha Yasassi Thero and Ven Rekhawa Jinarathana Thero were among the 45 monks who wanted the Mahanayake to cancel the Sangha Convention”. They initially threatened to leave the sect when blackmail failed they named the President “who personally spoke to the Mahanayake urging him to cancel the convention.” The Chief Prelate refused. That was when the ‘bomb threat’ was produced. When asked about the incident, the Chief Prelate replied “that the Mahanayakes were compelled to postpone the occasion to make sure the safety of the Maha Sangha and the Temple of the Tooth.”[iv]

That is how the Rajapaksas act towards any gathering of monks they think about undesirable.

Just this week Terrorism Investigation Division prevented Professional Web Journalists Association from holding a workshop on net safety. The management of the hotel exactly where the workshop was to be held was informed by the TID that an organisation (consisting of retried army officers and disabled soldiers) is organizing to surround the premises. The safety of the workshop-participants cannot be guaranteed, the TID stated. The management, like the Chief Prelates, got the message the workshop was cancelled.[v]

No such threats or warnings will mar the Sangha Convention of the Bodu Bala Sena. It will be held at the Sugathadasa Stadium, which in itself is a sign of governmental blessing. The visit to Sri Lanka by the hatemongering Burmese monk, U Wirathu, is also probably to go off without a snag. As the BBS boasted on its Facebook page, the saffron-robed rabble-rouser who gained infamy for remarks such as “Muslims are fundamentally negative Mohammed makes it possible for them to kill any creature Islam is a religion of thieves, they do not want peace,”[vi] came by means of the VIP lounge and was whisked off to a secure spot[vii].

Whether or not the Rajapaksas are actively assisting the BBS gathering, with money, facilities and monks (to fill the hall) is not known. But the really reality that the convention is getting held on such a giant scale proves that it has the Rajapaksa seal-of-approval. The Rajapaksas did not hesitate to use the most execrable measures to avoid the Sangha Convention in 2010, such as an implicit threat to bomb the Temple of the Tooth. The truth that they are permitting the BBS Convention to happen is the clearest attainable proof that this gathering has their blessing.

It is now virtually certain that Presidential elections will be held in January 2015, prior to the Papal go to. Obviously the Rajapaksas have been jolted into feverish haste by Uva. In such a fraught context, a massive gathering of monks will be permitted only if it is noticed as beneficial to the Siblings.

The Rajapaksas know that most Tamils and Muslims did not and will not vote for them. Their primary concern is to make certain that their help base amongst the majority community does not erode any additional. The electoral playing field has been skewed constitutionally the Siblings will not hesitate to use violence and malpractices. But as Uva demonstrates, such measures can outcome only in an incredibly marginal – and politically de-legitimising – victory. To win the huge victory they need to have, the Rajapaksas require to maintain their Sinhala-Buddhist base intact.

Economic concessions – more will be made in the coming months – might not be adequate even in the rural-fastness of Uva, a massive number of Sinhalese seemed to have noticed by means of that obvious gimmick. Other techniques are needed.

Sinhala-Buddhists have to be made to really feel insecure in order to reignite their desire for a strong protector. “Making the neighborhood far more fanatical and exploiting the resulting fanatics” [viii] seems to be the Rajapaksa aim. And a BBS-Wirathu combine will be excellent to concentrate the consideration of the Sinhala public not on their economic woes but on ‘threats’ to ‘Rata, Jathiya and Agama’ (nation, race and religion).

The BBS convention will constitute a leap forward in the Rajapaksa efforts to impose a racist politico-psychological climate on the upcoming election season. It will help enormously to maintain the electoral discourse mired in Tiger revivals, Jihadi threats and Christian/Catholic conspiracies.

In August 2007, JHU head, Ven. Ellawalla Medananda Thero proclaimed that (Christian) fundamentalists were arranging to infect Buddhist monks with AIDS. “I got details that fundamentalists at a meeting in Kurunegala had decided to eliminate Buddhism from this country. Portion of their strategy is to infect the monks with HIV virus… Monks could be infected with the virus when they go for a blood test or blood transfusion.”[ix]

That is the sort of discourse the Rajapaksas would want in the course of election season. What better way to drive genuine life economic, political and social problems than to addle and poison Sinhala-Buddhist minds with suspicion, worry, anger and hate against Tamil/Muslim/Christian fellow Lankans? Who far better to give that project a violent leap than ‘Buddhist Bin Laden’ of Burma?=

[viii] The Language of the Third Reich – Victor Klemperer