“Tyranny, like hell, is not simply conquered.” – Paine (The American Crisis)

Hopefully it is a fabrication, created in Medamulana, like the ‘news’ of America softening its stance towards Sri Lanka or Premier Modi wanting the TNA to participate in the newest All Parties Conference.

According to Irida Divaina, the JVP has decided to boycott the Presidential election, if Mahinda Rajapaksa is a candidate[i]. The logic is that President Rajapaksa can’t contest for the third time and if he does so it will be an illegal act which in turn will transform the election into an illegal exercising. The JVP, it is becoming reported, will neither field a candidate in such an illegal election, nor take part in a joint oppositional alliance. Alternatively the JVP will conduct a national campaign, educating the voters about the illegal nature of the election.

In other words, the JVP will (implicitly or explicitly) advocate an election boycott. It will confuse, confound and demoralise the anti-Rajapaksa camp and deprive the opposition of tens of thousands of a lot necessary votes. That such an outcome will advantage none but the Rajapaksas is apparent and certain.

This may be the JVP’s way out of its personal political conundrum. Anura Kumara Dissanayake is a marvellous speaker, factual, logical and forceful. But his leadership is not enough to make an sufficient turnaround in the JVP’s electoral fortunes. The Uva elections indicated, as did earlier provincial polls, that the JVP will fare incredibly badly if it contests the presidency separately. The JVP is certainly reluctant to assistance a UNP candidate. Since among them, Sajith Premadasa and Ranil Wickremesinghe, seemed to have killed the prospect of a joint oppositional platform, the JVP is attempting to locate a face-saving formula.

Did the Rajapaksas – or their allies – have something to do with the JVP’s surreally stupid decision? Following all, the Rajapaksas reportedly bribed the LTTE for imposing an election boycott on Tamil voters in 2005. Vellupillai Pirapaharan would have created the decision since he was rearing to unleash the Final Eelam War, but he clearly did not mind generating some economic gains, on the side. Mr. Pirapaharan was not a Rajapaksa stooge he was not in cahoots with the Rajapaksas. He was, or thought he was, getting diabolically clever. He was going to aid Mahinda Rajapaksa into energy, take Rajapaksa money and use it to defeat the Rajapaksa government in the battlefield. We know how that program ended.

If the boycott-story is accurate, the JVP is remaking Vellupillai Pirapaharan’s deadly mistake. The Rajapaksas will use the JVP boycott to win the election and then, getting secured familial rule by appointing a Rajapaksa as PM, will hammer the opposition into submission, which includes the JVP. Just as ordinary Tigers and ordinary Tamils paid the price tag of Vellupillai Pirapaharan’s colossal inanity, ordinary JVPers and their families will have to pay the price of JVP leaders’ hara-kiri logic.

Hopefully sense will prevail, and the JVP will abandon this suicidal-homicidal choice. But the very fact that such an inane thought has been mooted, plus the divisive and destructive conduct of Sajith Premadasa and his cohorts, indicates that the Uva Guarantee can well turn into a mirage, an additional tragic may possibly-have-been. (Sajith Premadasa conduct is the opposite of his father’s. Ranasinghe Premadasa worked, harder than every person else, for the party sans situations. His attitude was “First we will canvass the whole nation and then ask for our due place”[ii].)

The outburst of post-election violence in Uva (which reached unprecedented levels) is yet another signal of coming events. The Rajapaksas are not going to go, lawfully and democratically. They will do every thing they can, from trickery to thuggary, to remain.

“Better to destroy than to make cost-free,” Schiller’s Grand Inquisitor tells a wavering King Philip in Don Carols. That would be the Rajapaksa attitude, as Siblings, Sons and Nephews ready themselves to face a suddenly not-so-specific future.

The Plague of Tyranny

Jean-Claude Duvalier, ‘Baby Doc’, died yesterday of organic causes. At 19 years he inherited the presidency from his father and ruled supreme for the subsequent 14 years. Francois ‘Papa Doc’ Duvalier came to power electorally and transformed Haiti into a tyranny and himself into its president-for-life. Over the subsequent numerous decades, the Duvaliers made Haiti into a byword for repression and murder, poverty and backwardness.

The still ongoing plight of Haiti indicates that receiving rid of a tyrant may turn out to be the straightforward element. Recovering from tyranny is a far arduous task. Restoring to well being institutions and human habits undermined by tyranny frequently proves to be beyond the frail capacities of newly liberated lands and their newly free of charge individuals. The longer a tyranny lasts, the tougher it is to create a democracy on its ruins. This is especially so exactly where tyrants have undermined and destroyed all countervailing powers and institutions, turning nations into their private/familial preserves. 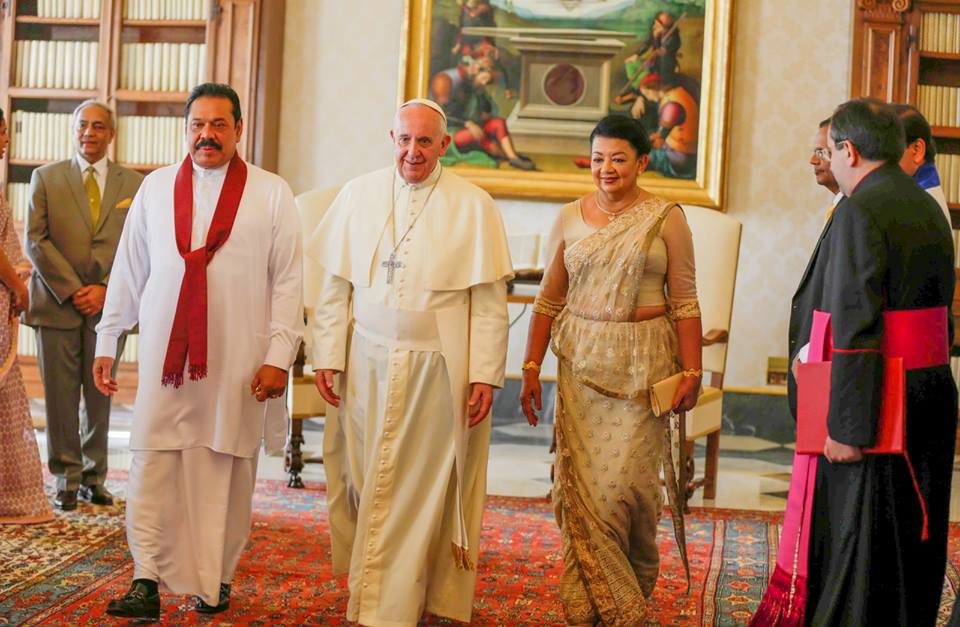 The inclusion of de facto Chief Justice Mohan Pieris in the presidential delegation to Vatican demonstrates (again) the degradation of one particular of the most fundamental pillars of the state. Right now the upper judiciary is a mere appendage of the Ruling Family. If the Rajapaksas can be evicted next year, it may nevertheless be feasible to repair the damage and restore the judiciary to overall health. But if Rajapaksa rule continues for a lot of a lot more years, the virus of subservience will infect the entirety of that august institution and even the memory of judiciary as an independent pillar of state will vanish. The next generation, like the next generation of judges and lawyers, will think it natural and normal for the judiciary to act as an instrument of Rajapaksa energy.

As Joachim Fest pointed out, “At initial the numerous violations of the law by our new rulers nonetheless caused a degree of disquiet…. quickly life went on as if such crimes had been the most all-natural factor in the world”[iii].

Rulers set trends. We learnt to drink tea from the British. The Sinhala-Buddhist morality espoused by Anagarika Dharmapala and his ideological descendents is much more akin to English Puritanism, German Calvinism and Victorian values. The colourful costume worn by the Kandyan kings and aristocracy (which goes by the misnomer, ‘Mul Anduma’, original dress) was naturally copied from the European fashions of the 15th/16th century, brought to Lanka by the Portuguese. These days the kurrakkan shawl of the Rajapaksas has grow to be a fashion accessory among the new elite and these aspiring to that status. Rank nepotism, abuse, impunity and intolerance are some of the Rajapaksa values which are percolating into larger society. 5 far more years of this contamination, and even the ousting of the Rajapaksas will not suffice to bring Lanka back to overall health and sense.

The Opposition has been buoyed by Uva. But Uva represents a possible, a chance, an opportunity and not a certainty. The Rajapaksas will do everything in their energy to avert the opposition from capitalising on Uva. The unresolved crisis in the UNP and the JVP’s choice to boycott elections are merely the 1st stumbling blocks in the opposition’s achievable path to victory.

Uva opened a trapdoor. It can be widened into an exit for the Rajapaksas.

It can be done. But will we do it?

[ii] Quoted in ‘President Premadasa and I: Our Story’ – B Sirisena Cooray

[iii] Not Me: Memories of a German Childhood