I feel it is my duty to respond to the comments of my unseen buddy Viruddha Pakshikaya last week, as he has attempted to paint a bleak-and false-picture of Sri Lanka below President Mahinda Rajapaksa &#8212 and is already behaving as if the election has been won by Maithripala Sirisena. I&#8217m told that the joint Opposition is currently fighting for portfolios amongst themselves!
My answer to Viruddha Pakshikaya comes in the form of just two words: Tissa Attanayake. Now, I don&#8217t know Tissa personally but this is the man who looked soon after the nuts and bolts of the UNP&#8217s election machinery for the last ten years right after Gamini Atukorale&#8217s untimely demise. Yes, the UNP did not win many (or certainly any) elections in the course of his tenure but with a leader like Ranil Wickremesinghe, that is hardly Tissa&#8217s fault.
Tissa quit the UNP, joined the UPFA, was appointed Overall health Minister and is now a star attraction at UPFA rallies, spilling the beans on what it is like to be in a dysfunctional Opposition. Now, if Tissa believed the Opposition could win, he wouldn&#8217t be carrying out all this, would he? And he should know. 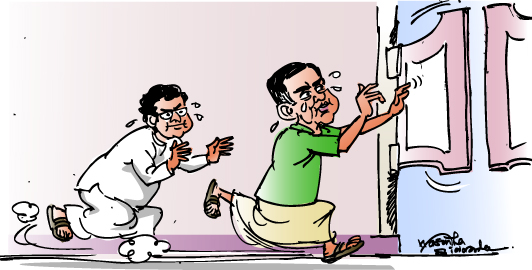 I can almost hear Viruddha Pakshikaya scoffing in response to this, saying that Tissa was only a National List MP who was beholden to the UNP for his seat in Parliament. And my answer to that comes in the kind of an additional two words: Udaya Gammanpila.Now, right here is a bright young man with a political future ahead of him. Even even though he was from the JHU, he obviously attracted adequate SLFP votes to emerge second in the preference votes at the current Western Provincial Council election. And he also &#8220rejoined&#8221 the UPFA campaign last week.
He had left the UPFA a handful of weeks ago to join the Maithripala Sirisena campaign. What he saw there frightened him so considerably that he came running back to the UPFA. His explanation was that he couldn&#8217t be component of a Government that incorporated Ranil Wickremesinghe and Chandrika Kumaratunga.
Viruddha Pakshikaya accuses me of not receiving &#8216good grades for history at school&#8217. Let me enlighten him on a little bit of recent history if he is the pundit in history: let us don’t forget, shall we, the last time when Wickremesinghe and Kumaratunga have been in the exact same Government? She was President, he was Prime Minister. It was 2001.
Kumaratunga complained bitterly about how she was treated by the UNP Cabinet. She was accused of bringing a video camera in her handbag by Ravi Karunanayake. Kumaratunga took over three portfolios whilst Wickremesinghe was gallivanting in Washington. There was chaos all around. That was the cohabitation Government we had.
Tell me, Viruddha Pakshikaya, is that the state of cohabitation to which you want us to return to? And this time about, there are even a lot more men and women than just Wickremesinghe and Kumaratunga pulling Maithripala&#8217s puppet strings: Sarath Fonseka, Champika Ranawaka and perhaps even the JVP and the TNA.
Viruddha Pakshikaya has two major complaints about President Rajapaksa continuing in office: the part played by his family and his alleged persecution of so-called &#8216opponents&#8217 such as Sarath Fonseka, Mangala Samaraweera, the JVP and Shirani Bandaranayake. It appears as if Viruddha Pakshikaya wants to refresh his memory.
Family politics is part of South Asian politics. That is why, for most of its history, the UNP was led by the Senanayake-Jayewardene-Wickremesinghe clan and why it was identified as the Uncle Nephew Party. The Bandaranaikes led the SLFP for fifty years so maybe it is now the Rajapaksas turn.
As for the &#8216persecution&#8217 of opponents, Sarath Fonseka is totally free to say what he wants and campaign for Sirisena only because he was pardoned by the President! About Bandaranayake, the CJ 43 as her supporters like to get in touch with her, I do recall the UNP maintaining that Parliament was above the judiciary, when her impeachment came prior to the House!
And just so that our readers don&#8217t miss the point, let me add that Maithripala Sirisena was a part of all those decisions: he raised his hand to impeach CJ Bandaranayake, to pass the 18th Amendment, to encourage crossovers to preserve a majority in Parliament, so why has he abruptly woken up from slumber now?
The answer is that Sirisena and these pulling his strings believe there is a shortcut to energy. They consider &#8212 incorrectly, of course &#8212 that the men and women would reject President Rajapaksa basically simply because he has been in office for two terms. The people of this nation, Viruddha Pakshikaya, are smarter than that. And they are a grateful individuals, as properly.
The decision just before them is, in truth, really simple. A single, a leader with a confirmed track record who won a war that all of his predecessors lost, and jump began the economy which under Chandrika Bandaranaike when got a record zero per cent development. The other, just a representative of an array of political forces whose only frequent ground is their dislike for President Mahinda Rajapaksa.
The outlandish items they say are hilarious. For instance, Chandrika claims she won 75 per cent of the war. The lady who wanted to bring LTTE representatives into the P-TOMS soon after the tsunami, and give them &#8216Federalism&#8217 through a &#8216package&#8217 and an ISGA (Internal Self-Governing Agency) says she won 75 per cent of the war. You don&#8217t win 75 per cent of the war. You need 100 per cent of the war, and that is what our President did.
Take Maithripala Sirisena&#8217s manifesto released this week. Viruddha Pakshikaya, if you can recognize the English in which it is written, you will see what a hoax it is. They are nothing about nothing. It&#8217s all wishy-washy stuff. It is a riddle wrapped in a mystery inside an enigma.
So, as Viruddha Pakshikaya himself says, the end is nigh not for the President but for Sirisena and his accomplices. For them, the writing is on the wall, not only metaphorically but actually as effectively, if 1 have been to assess common support making use of the posters for the respective candidates as a barometer!
I do agree with Viruddha Pakshikaya that come the eighth of January, there will be a &#8216maithree paalanaya&#8217 but sadly for him, it will not be headed by Maithripala. It will be headed by Mahinda Rajapaksa who will govern with maithree or loving kindness, even to Maithripala and his achcharu coalition.