An excellent piece in the New York Times today talks about ‘Monks Gone Bad’, describing a corrupt and violent Sangha that uses hate speech and abuse against minorities and is helmed by leaders who resemble fatuous politicians and not the ‘birds of the wing’ that the Buddha wanted his mendicant followers to be. I am not here to point out the contradictions between Buddhism as taught and Buddhism as practiced, the ingloriousness of Buddhist praxis nowadays is evident for all to see. I just wanted to point out that at every instance in that article where I saw Myanmar, I could have easily inserted Sri Lanka. For every instance where I read about 969 in the news, I can insert ‘Bodu Bala Sena’. About the only words that do not require replacing are ‘anti-Muslim’, ‘minority’ and ‘hate’. 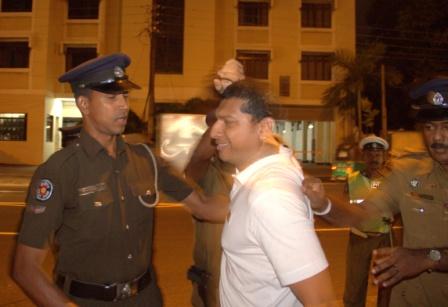 As we all know, the police, together with the Bodu Bala Sena soon disbursed the vigil, arresting some, manhandling others, and collecting the names and pictures of most of the attendees.

The Bodu Bala Sena and its kindred run amok in Sri Lanka, like bullies in a school playground, and with not much more in the way of finesse. They hurl offensive invective towards religious minorities, and their words have resulted in quite a few violent incidents against Muslims ,and at least one against Christians, re-opening wounds in the country that are still struggling to heal after the 30 year war. They seem to operate in a space where Sri Lanka has not just lost so many lives, its economic development, and so much of its natural beauty to a long, long war. In order, perhaps, to call their attention to this, a peaceful vigil was held outside the headquarters of the Bodu Bala Sena. As we all know, the police, together with the Bodu Bala Sena soon disbursed the vigil, arresting some, manhandling others, and collecting the names and pictures of most of the attendees. Not only this, the Facebook page of the Bodu Bala Sena decided to ‘name and shame’ these attendees, causing their supporters to enact the most disgraceful bout of name-calling, verbal harassment and racist trolling that I have ever seen on social media.

One of the ‘points of order’ from the Bodu Bala Sena, its supporters and some of the media who covered the incident, was that the legitimacy of the vigil was in question because the attendees did not represent the Buddhist population, that many Muslims, Christians and Hindus were present. On Facebook, attendees are called out as ‘demalek’ ‘muslimayek’ ‘jathiyak nathe’. Indeed, an attendee tweeted that he overheard someone saying that the vigil was convened due to a ‘conspiracy of Muslims and Catholics’. So much for a critical understanding of religious history- perhaps the speaker would be better served from devoting his time to education rather than racist troublemaking! To each his own, however.
It is altogether more worrying thing that this misrepresentation of the attendees was not only picked up by the media, but that it was also the feature of an article by Malinda Seneviratne, writing in the Colombo Telegraph. The good gentleman, from his considerable experience, no doubt, is able to discern a Buddhist from a non-Buddhist, and therefore writes an entirely unnecessary article that serves only to distance himself from standing with those who attended the vigil. In response, Dr Dayan Jayatileka – who is experiencing some changes to his tune- quite rightly pointed out the flaws in Mr Seneviratne’s argument, but did it in a manner that entirely calls attention to his own accomplishments and ‘stake’ in the manner. The riposte from Mr Seneviratne was then, to accuse the good Doctor of ‘throwing his CV’ at him. I ask you, gentlemen, is this really the response to what is happening in Sri Lanka? The actions of the Bodu Bala Sena, and the complicity of the government in them are grotesque enough without the debate being reduced to puerile attacks on each other’s logic.

If you have a voice that can be heard and that has gravitas, and you both have the great privilege of this, why not turn it more fully toward more constructive dialogue? Why not ask that the rights of those who attended the vigil be defended? Countless women- because the body of the woman is so carelessly mangled in these cases- are facing vile, misogynistic abuse via Facebook from the supporters of the Bodu Bala Sena. These men direct all their perverted, violent fantasies at these girls who really do not have much in the way of legal succour. After all, the AG has instructed victims of social media attack to file complaints with the police. Yes, the very same police who put the kybosh in the vigil. Why not direct more energy into rousing the non-English speaking Buddhists to speak out against the Bodu Bala Sena with less articles in places like the Telegraph which are read by the diaspora and the English speakers? Yes, the handicap at the vigil was that there were many who attended who were ‘English speaking’- but that does not make them any less Sri Lankan, any less Buddhist, any less angry, or any less valid in their protesting attacks on minorities. Give out your voice in solidarity with each other, with those who will question the validity of the Bodu Bala Sena, and in solidarity with what must be a better tomorrow.

*Anupama Ranawana is a wishful academic and a practicing activist. She can be reached for comment via Twitter @MsAMR25