Mohan Pieris had to go. Regrettably the indicates utilised to eject him seem also Rajapaksa-like for comfort.

Right after they got rid of Shirani Bandaranayake by way of an illegal-impeachment, the Rajapaksas could have replaced her with one more Supreme Court justice or a legal luminary with some degree of independence. Alternatively they chose Mohan Peiris, a man infamous as a Rajapaksa-cipher. By doing so the Rajapaksas indicated clearly the subservient and partisan function allotted to the judiciary in their Sri Lanka. 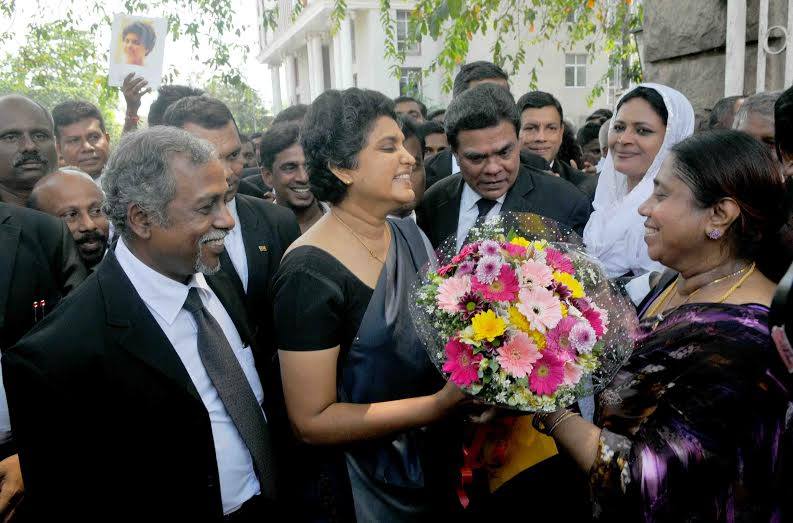 Mr. Pieris did not disappoint his masters. He acted not as the Chief Justice of Sri Lanka but as the Rajapaksa Chief Justice. Provided this record, his questionable presence in the Temple Trees in the early hours of the morning-soon after-elections is hardly questionable. As ‘Chief Justice’ he created Sarath N Silva seem a model of probity and rectitude. That is saying fairly a lot.

Mr. Pieris could have resigned honourably but he opted not to. Yet another impeachment with an clearly preordained outcome would have turned the whole procedure into a negative joke.

Probably the legal technicality used by the government is a valid one. Nevertheless items could have been done in a manner which did not look so arbitrary, so redolent of abuse of energy. At the least, the President could have informed the parliament and the nation formally of what he intended to do and why &#8211 just before it was accomplished. Maybe parliamentary approval and judicial sanction could have been sought. Such measures may possibly have been absolutely nothing much more than window-dressings, but their absence bares the excessive use of executive energy and of political muscle.

The alleged depredations of Provincial Councillor Azath Salley render the entire saga even uglier. Mr. Pieris has lodged a complaint accusing Mr. Salley of threatening him. That complaint need to be investigated speedily and impartially, and if tenable, Mr. Salley have to be brought prior to the law. Mr. Pieris was an execrable chief justice but a technique which fails to provide him the protection he is entitled to as a Lankan citizen is no greater than him – or his Rajapaksa masters.

Political sins cast quite lengthy shadows. The very first episode in the ugly drama of the final few days was enacted for the duration of the presidency of Chandrika Bandaranaike Kumaratunga. Desiring a more amenable judiciary, she bypassed Justice Mark Fernando and gave the CJ position to her handpicked-favourite, Sarath N Silva. Mr. Fernando had carried out significantly to defend the fundamental rights of the citizen against the excesses of the state and the government. He was learned, fearless and impartial. Because there was no way to impugn his impeccable character, it was whispered that his religion (he was a Catholic) made him ‘unsuitable’ to be the Chief Justice and that the Chief Justice ought to be a Buddhist. Lankan judiciary never ever recovered from that outrage. (Ironically, a couple of years later, the JHU utilised the same ‘religious’ argument to advance the claims of Mahinda Rajapaksa to the premiership, over the far a lot more appropriate Lakshman Kadiragarmar).

The new Chief Justice will be the senior-most member of the Supreme Court. That is the only commendable point in this really murky saga. That the post of Chief Justice is provided according to seniority ought to be turned into a constitutional provision. Such a provision together with the restoration of independent commissions can hopefully bring to a definitive end the deadly practice of the executive/legislature interfering in the judiciary.

The manner in which Mohan Pieris was ejected have to not grow to be an additional lethal precedent. That danger can be averted only via a new constitutional arrangement which revitalises and strengthens separation of powers.

The transition from Rajapaksa familial rule to democratic normalcy is a complex affair due to the very nature of the Rajapaksa project. The Siblings’ goal was to turn the Lankan state into a patrimonial oligarchy. Consequently a conscious work was made to impose familial dominance on every little thing, from the military to the judiciary, from the bureaucracy to the economy.

The alter Sri Lanka is experiencing is as a result a lot more than the common replacement of one particular government with yet another. The National Executive Council (NEC) is a distinctive experiment born out of the specificity of this conjuncture. In that structure, the JVP and the UNP, the TNA, the SLMC and the JHU are functioning together with a degree of maturity which would have been unimaginable just a month ago.

This week, the controversial UPFA politician Nishantha Muthuhettigama informed the media that “a Mahinda Rajapaksa era will be born in this country once again in 3 and a half months”[i]. His statement indicates, again, that diehard kith and kin are dreaming/plotting a Mahinda Rajapaksa comeback. Preventing such an outcome is in the interests of not just the former ‘Common Opposition’ but also the post-Rajapaksa SLFP. The new Leader of Opposition also ought to be brought into the NEC, to render the entity a lot more representative and to enhance the isolation of Rajapaksa-diehards within the SLFP/UPFA.

According to media reports the NEC has reached agreement on a constitutional amendment replacing the executive presidency with a dual-executive system. Even though information are not offered, the new arrangement is likely to veer towards a premier-presidential program rather than a presidential-parliamentary method. A premier-presidential program will mean that the PM and the cabinet are accountable exclusively to the elected parliament. It will also prune a lot of of the presidential powers. The resultant division of executive energy amongst the president and the prime minister in conjunction with the Independent Commissions will restore separation of powers in a a lot more strengthened form and give the Opposition a actual say in governance. This new democratic amalgam (including a hybrid electoral system and the Correct to Details Act) will generate critical systemic impediments to the overweening ambitions of energy-hungry political leaders.

Economics enabled Maithripala Sirisena to defeat Mahinda Rajapaksa. As a result paying attention to economic needs of the ordinary folks is vital to avoid a Rajapaksa return to power. So far the new government has acted in a manner which has made people hopeful about significant improvements in their living situations.

There is a need to have to make ordinary individuals, specially amongst the majority community, realize the degree to which the Rajapaksas abused power and state resources. But the existing practice of running hither and thither right after rumoured racing automobiles and sea planes need to be replaced with a much more orderly and legal work to uncover Rajapaksa excesses.

Crimes need to not go unpunished. But at instances like this, the line in between justice and revenge can be a quite fine a single. The new leaders need to make certain that their a lot more radical supporters do not overstep that line. Replacing prosecution with persecution would be contrary to ‘good governance’ and intelligent governance.

Zeal for justice have to be tempered with doses of mercy, practicality and prudence enabling the Rajapaksas to don martyrs’ robes will be a negative notion indeed. In the absence of written orders it will be impossible to make legally tenable charges about the alleged coup. But when it comes to the billions the Rajapaksas owe the state for the use of buses, helicopters and media for election purposes – these will be open-and-shut situations certainly.