I should state at the extremely outset that in my title Are Foreigners backing anti-Muslim racism in Sri Lanka? I am posing a question, not stating a conclusion. I believe that in political analysis it is essential to pose inquiries even when no definitive answer is available. The explanation is that some queries could quantity to fertile hypotheses that lead to answers later. In some circumstances it could be crucially crucial to pose inquiries even when no much more than conjecture of a rather wild order is feasible. This applies to foreign involvement in our internal affairs as it can sometimes have quite horrible consequences. That was shown in the case of the Tamil ethnic issue. We should try to ensure that there is no repeat efficiency in the case of the Muslim ethnic problem. We must as a result pose the question regardless of whether foreigners are backing anti-Muslim racism in Sri Lanka even although no more than conjectural answers could be possible at the moment.

I will now indicate really briefly how foreign involvement in our Tamil ethnic difficulty has had very horrible consequences. India insisted that our troops refrain from going into Jaffna right after the effective Vadamarachchi operation, and President Jayewardene caved in to that demand when he could have resisted it without a lot difficulty – as I have shown in recent articles. The result was the extension of the war by twenty two years at the cost of a hundred thousand deaths. Norway and other countries initiated a peace procedure with the greatest of intentions. But they did not realize that the LTTE would be content material with nothing at all less than Eelam or a confederal arrangement close to it. They did not recognize that the LTTE was by no means critical about a negotiated political remedy. And they believed that the war was unwinnable. Consequently they contributed mightily to our ethnic disaster. 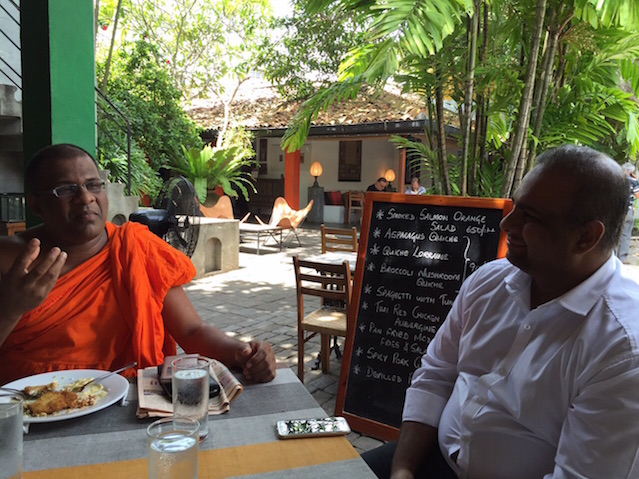 The evolution of our Muslim ethnic problem supplies a really vivid illustration of the destructive potential that there is in foreign involvement. There were anti-Muslim ructions from 1975 to about 2002 then there was the Grease Yakas episode in which Muslim ladies were targeted for harassment and also there was the dilemma of Muslim businessmen being kidnapped for ransom. But all that did not amount to a significant Muslim ethnic problem causing international concern. That transformation occurred right after the BBS began its anti-Muslim hate campaign. It clearly had the backing of Norwegian Islamophobes, but who else was involved? According to the former President MR it was all element of an international conspiracy to topple him. Following the next Government is installed there must be a thorough enquiry into the question of foreign backing for the BBS.

A Muslim pal of mine tells me that he followed closely the BBS’s anti-Muslim campaign and discovered that their speeches to the masses were heavily influenced by Western Islamophobia. He is convinced that the heaviest input into these speeches was produced by Israel. This brings me to the query whether or not the Israelis have participated in advertising anti-Muslim racism in Sri Lanka, and much more especially no matter whether I have been targeted by the Israelis. I wield the pen and such persons can be troublesome, even hazardous, which is why practically all governments attempt to handle the press or influence it. And of course as a Muslim I can be expected to be unsympathetic to Israel. In addition there is a distinct purpose why I could have drawn the unwelcome attentions of the Israelis. It is believed that President Premadasa decided to close down the Israelis Interests Section in consequence of a speech created by me.

Among the Tamil lunatic fringe racists who have been attacking me there is one particular who appears to be the agent of a foreign power. I must give the context in which my suspicion tends to make sense. The concerted attacks against me – concerted virtually surely by the LTTE – died out altogether right after obtaining flourished vigorously for numerous months, as I pointed out in my last write-up. As far as I can bear in mind there is only 1 participant in these concerted attacks who still continues to attack me. Each and every week he is joined by a couple of newcomers. A noteworthy reality is that the hysterical hatred and the mad dog rage – which in the early days of the concerted attacks led me to create of “a total annihilating hatred” – has largely diminished. The hatred and rage are still there, but they are given vent to in sneering and jeering. I think that the explanation for this welcome transformation is that my counter-attacks have created the Tamil racists appear ridiculous. The lesson to be drawn is that the antidote to racism is to counter attack it, not to ignore it, in which case it flourishes. Anyway the crucial point is this: the attempt to cease me being published by the Island and the Colombo Telegraph, which was the motivation behind the attacks, has failed totally.

The motivations for the continuing attacks have to be sought elsewhere. It is partly that impotent rage is finding expression via sneering and jeering. But in the case of the sole survivor from the days of the concerted attacks I consider the motivation is to market hatred of Muslims, the expression of an Islamophobic drive. K’s functionality – let’s contact him K – is in a class apart from the other people in critical respects. Though his hatred and rage are clear, as in the case of the other individuals, he surprisingly concedes that I am properly study and readable. My guess is that his foreign mentor has told him that if he is merely abusive he will lack credibility, and that he need to concede some merit to me so that his attacks will then appear unprejudiced. My guess is also that his foreign mentor has instructed him to adopt Goebbels’s strategy of the massive lie: if a lie, any lie, is repeated often it will come to be believed by the public. I have observed much more than a single reference to Goebbels’s idiotic notion in Tamil contributions to the Colombo Telegraph.

K’s responses are in a class apart for becoming chockfull of blatant lies, distortions, quotations out of context and so forth, displaying that his Goebellsian strategy is forging ahead complete blast. I provided details to the reader on how to access the text in which I wrote against the use of starvation against the LTTE, but he prefers to think that I advocated the opposite. I quoted Maugham as saying that under the Nazi occupation the French would have to “eat shit”. K has insisted, regardless of my creating the needed clarification, that I thereby referred to the Tamils as “shit”. In my final article I referred to the stereotype according to which the Muslims are, amongst other things, superb “drug traffickers”. He attributes that view to me, not to the stereotype, and proceeds to berate me more than that in a lengthy paragraph. Is K clinically mad? I believe that the explanation for what appears like lunacy is that he is following the Goebellsian technique of the massive lie. Anyway what interests me is regardless of whether he is acting as the agent of a foreign energy.

I can believe of only one country in the world that could have a quite special interest in the promotion of Islamophobic hatred: Israel. It has to be anticipated that several Israelis will have a visceral hatred of Muslims, warmly reciprocated by Muslims since human beings are human beings are human beings. We have to bear in mind that Israel is presently going via a phase in which it is extensively regarded as an apartheid state – Archbishop Desmond Tutu believes that its apartheid is even worse than that of the former South Africa. We should also bear in mind that Israel’s present leader appears to be clinically mad at least to some extent, as indicated by his former psychiatrist who committed suicide in 2010, and he appears to be in a state of genocidal rage against Iran. Netanyahu is indeed the very epitome of the sort of leader that Theodor Herzl would have wanted for Israel, considering that Herzl saw Israel as the last bastion of European civilisation against the advancing Asiatic hordes. Ultimately we must bear in mind that several of our Tamils have had a deep admiration for Israel, and that the LTTE which wants to be taken as a liberation movement has never spoken up for Palestinian liberation even after. It seems to be a extremely reasonable surmise that the Israelis could use the lunatic fringe Tamil racists to foment hatred against the Muslims. The Government need to look into that possibility, bearing in thoughts the terrible harm that has been triggered to Sri Lanka by interfering foreign busybodies.