The Bodu Bala Sena (BBS) organisation has stressed upon the fact that they have never promoted anti-Muslim campaigns nor utilized hatred or violence as a tool in their activities. 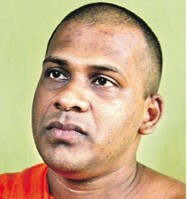 In a statement issued to wish the new President and Prime Minister, the organisation has stated that given that its establishment in 2012, they have only worked towards safeguarding Sinhala Buddhists under a clear vision and program but that certain comments they produced have been misinterpreted and exploited to market the notion that they are an anti-Muslim group.

&#8220We have by no means at any point utilized hatred or violence as a tool but due to specific actions carried out by other groups, the media as effectively as particular anti-Buddhist groups have misunderstood us,&#8221 the organisation has stated.

The BBS has noted that even though their initial strategy was to stay neutral at the Presidential elections that just concluded, they decided to help Mahinda Rajapaksa as a outcome of the wrongful suggestions that were integrated in the election manifesto of the typical candidate relating to religious tensions in Sri Lanka and the all round opposition in the common Opposition camp concerning the BBS.

They have stated they view the votes of the North/Eastern Tamils as a deciding aspect in the election.

&#8220Although the North/Eastern votes are now being interpreted as a vote cast to oust the former President who won the war than a correct reflection of their help for the new President, we observe it by means of an unbiased mindset. We feel that their voting for a Sinhalese leader and working to make sure his victory is a blow against the separatist forces and different international groups that attempt to divide this nation,&#8221 the BBS has stated.

The group has stated that it shows the will of the Tamils to live in a united nation and has emphasized on the reality that the government should work challenging in order to guarantee it turns into reality than it merely remaining an expectation.

&#8220This is a golden chance for this government to win the trust of Sinhala Buddhists and this is a chance that we must seize to rid ourselves of the labels of becoming racists and a creation of the former government,&#8221 it has additional noted.

The BBS has also called upon the government to think about gravely, the concerns they have highlighted for the duration of the previous thirty months regarding the safeguarding of Buddhism and Buddha Shasana and the security of Buddhists, pointing out it would help in establishing the trust of the Sinhala Buddhists in the new government.