The Tamil Civil Society Forum (TCSF) says the characterization of the final phase of the war by the President of the nation as a &#8220humanitarian operation&#8221 does not bode nicely with his Government’s guarantee of a credible inquiry. 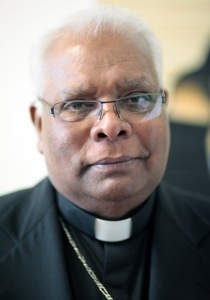 TCSL Co-Spokesman, Elil Rajan in a letter UN Particular Rapporteur on the Promotion of Truth has mentioned &#8220We also would like to remind you that the Foreign Minister of Sri Lanka in his speech to the UNHRC on the 2nd of March stated that only UN assistance will be sought and not involvement. Hence in the absence of substantial international involvement in the design and delivery of an accountability mechanism and offered the attitude of the present Government towards the credible allegations against the armed forces we have no explanation to think in the Sirisena Government’s promise of a credible internal inquiry.&#8221

We publish under the letter in full

UN Specific Rapporteur on the Promotion of Truth,

Justice, Reparation and Guarantees of Non-Recurrence

Transitional Justice and Domestic Mechanisms for its realization in Sri Lanka.

We are thankful for your visit to Kilinochchi today and take this chance to spot on record in writing, particular troubles of significance that we hope to raise with you in your brief meeting with us these days.

The Government of Sri Lanka (GOSL) sought and was granted a deferral of the report of the OHCHR Inquiry on Sri Lanka (OISL) on the promise of placing in spot a credible internal mechanism in the pursuit of truth and justice in Sri Lanka.

(Please see attached marked as ‘A1’ our letter to the High Commissioner on the deferral of the report and marked as ‘A2’ our statement on the decision to defer the report).

There was no credible proposal in the public domain that the Government had place out when it sought the deferral. The UN Human Rights Commissioner in his address to the Council on the 5th of March 2015 insisted that GoSL ought to consult the victims in designing this internal mechanism. To date no such approach has been initiated[1].

The Prime Minister of Sri Lanka throughout a recent pay a visit to to Jaffna[two] has mentioned that discussions are underway with the help of the South African Government to set up a Truth Commission. He further elaborated that the suggestions of Sir Desmond de Silva, a single of the authorities appointed by the prior Government to guidance the Presidential Commission on Missing Persons, has been tasked with identifying the legal framework required to provide for such an internal mechanism. The existing Government has also decided to let the Presidential Commission on Missing Persons continue its investigations regardless of its flawed mandate and modus operandi.

(Please see attached, marked as ‘A3’ the statement by the Tamil Civil Society Forum and the Welfare Organisation of the relatives of these forcibly disappeared communicating our decision to not to attend any additional hearings of the Commission)

We submit that it is a lot more than clear from the above that the existing Government has accomplished very small or absolutely nothing to seek the advice of the victims in the style of its internal mechanism. The entirety of the method is becoming made in secrecy. From what has been produced public GoSL is attempting to show progress by rehashing the previous regime’s approach of talking to the South Africans and utilizing the solutions of a particular person whose credibility and standing are very suspect.

In a speech delivered in Parliament lately the Foreign Minister of Sri Lanka stated as follows:

“As you are aware, in the spirit of operating in harmony with the international community, the Government has extended invitations to the UN High Commissioner for Human Rights and the Working Group on Enforced and Involuntary Disappearances. Some sections of the former regime contact this a betrayal of the armed forces. Nonetheless, this is furthest from the truth. Our objective, Hon. Speaker, is to clear the name of our armed forces who have received wide international recognition as expert and disciplined forces”[3].

The Foreign Minister’s assertion that the objective of his Government’s engagement with the UN (and concomitantly the guarantee to establish a domestic mechanism) is to ‘clear the name of the armed forces’ is deeply problematic.

The Government’s partiality towards the armed forces was produced even clearer by President Sirisena in the order that he issues granting Common Sarath Fonseka with the title of Field Marshal. In that order the President asserted that Sarath Fonseka is bestowed with the honourary rank of Field Marshal for ‘outstanding gallantry, meritorious efficiency and distinguished service to the nation in the course of the humanitarian operation and the defeat of terrorism in Sri Lanka in May 2009’[four]. The characterization of the last phase of the war by the President of the country as a humanitarian operation does not bode well with his Government’s guarantee of a credible inquiry. These statements by the President and the Foreign Minister we are afraid show no departure from the policy adopted by the former Government on accountability.

We also would like to remind you that the Foreign Minister of Sri Lanka in his speech to the UNHRC on the twond of March said that only UN help will be sought and not involvement[5]. Therefore in the absence of significant international involvement in the design and delivery of an accountability mechanism and provided the attitude of the present Government towards the credible allegations against the armed forces we have no cause to believe in the Sirisena Government’s promise of a credible internal inquiry.

We think that the domestic treatments exhaustion criterion ought to be viewed a lot more holistically by very carefully searching at the contextual and structural factors that historically clarify the lack of accountability and the pervasive nature of impunity in Sri Lanka. A closer evaluation of these aspects will aid much better explain as to why impunity reigned not just below the previous regime but also beneath all successive governments in the previous 40-50 years.

Our understanding is that a vast majority of the Sinhala Buddhist population in the South condones the war and impunity for violations committed in its name as a necessary and unavoidable price in the try to retain the united and unitary character of the state. Hence even really minimal action taken against the Sri Lankan Armed Forces has been interpreted as a betrayal of the Sinhala Buddhist Nation and an act that amounts to siding with foreign, alien powers that seek to include and destroy the Sinhala Buddhist nation-state of Sri Lanka. In this imagination Tamils, Western Governments, the UN and all these who demand accountability are regarded as to be participants of the foreign conspiracy that is seeking to break the unity and territorial integrity of the state.

It is most unfortunate not even the Sirisena Government is willing to tackle this fear by addressing it straight. No Government in post-independent Ceylon/Sri Lanka has made an attempt to address these issues honestly and hence unsurprisingly Sinhala Buddhist ideology has received democratic endorsement repeatedly at Sri Lankan elections. This is why even President Sirisena was unwilling to make any substantive guarantee with regard to accountability in his election manifesto and in truth repeatedly claimed that it is his victory alone that will be able to safeguard the former President from international attempts at holding him to account. Post-elections, we are witnessing a continuation of this dormant and idle political technique of wooing the Sinhala Buddhist vote base. The very best example of this is how the deferral of the OISL report is being trumpeted as a main victory for the Sirisena Government with an eye on the upcoming Common elections. Unless the Sirisena Government is willing to accept and clarify to its electorate that the violations committed by the Sri Lankan Army were morally wrong there is no real hope for accountability and non-recurrence. As an individual who believes that transitional justice need to be viewed from a contextual and holistic picture we believe that you will understand the complicated set of factors that very best aids us understand historically the lack of accountability for the violations committed in the troubled history of post war-Ceylon/ Sri Lanka.

A holistic transitional justice programme ought to consist of institutional reforms that will guarantee non-recurrence of mass atrocities. This is traditionally defined as institutional reforms of the security sector and the law enforcement authorities including the court system. We think that in the Sri Lankan context that this has to go even deeper. Unless the unitary character of the Sri Lankan State imagined and constructed around a Sinhala Buddhist Nation-State is abandoned Tamils will not feel safe in this island. This necessarily indicates an internationally mediated approach towards finding a sustainable and just political remedy. Such reforms need to also incorporate the repeal of draconian legislations such as the Prevention of Terrorism Act.

We conclude expressing hope that you will engage in fruitful discussions that lend towards a nuanced and honest assessment of the possibility of Transitional Justice in Sri Lanka.

[1] UN Human Rights High Commissioner Zeid Ra’ad Al Hussein, Opening Statement, 28th Session of the UN Human Rights Council, Offered at: http://www.ohchr.org/EN/NewsEvents/Pages/DisplayNews.aspx?NewsID=15642#sthash.XXYsHubz.dpuf : “I urge the authorities to seek advice from deeply with the folks, especially victims, in order to design mechanisms that will work and not repeat the failures of the past”

[five] Complete text of the Statement delivered by Mangala Samaraweera, Minister of Foreign Affairs of Sri Lanka and Leader of the Sri Lanka Delegation, at the High Level Segment of the 28th Session of Human Rights Council, 02 March 2015 offered at https://www.colombotelegraph.com/index.php/foreign-affairs-minister-mangala-samaraweeras-unhrc-speech-these days-complete-text/

[six] Oral Report of the UN High Commissioner for Human Rights on on the promotion of accountability and reconciliation in Sri Lanka (24 February 2014) accessible at http://www.ohchr.org/EN/HRBodies/HRC/RegularSessions/Session27/Documents/A.HRC.27.CRP.2_AV.doc.