Mahindanada Aluthgamage, Minister of sports along with Dr Ramesh Pathirana MP and son of former Education Minister Richard Pathirana representing the government in the Wadapitiya tv debate on Derana Television in the evening of December 03,  2014 walked out of a live programme following a phone caller questioned Aluthgamage on his integrity and the charges of bribery and corruption leveled against him. The caller was referring to the bribery charge made by his estranged wife to the bribery commission, which the caller claimed was not investigated. Without having responding to the charges, Mahindananda went on a verbal barrage and calling the caller a beggar, and abusing the media network that is owned by the daughter of a prominent minister and the campaign manager of the Mahinda Rajapaksa re-election media approach. 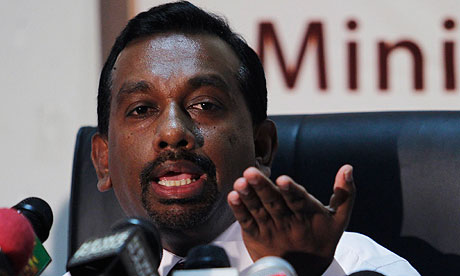 The Minister, in his arrogance possibly felt that he had the correct to criticize the Derana network for entertaining a phone call from an opposition phone-in participant who was questioning Aluthgamage’s conduct as a prominent member of the United Peoples Freedom Alliance, the current ruling party in Sri Lanka. In his uncontrolled verbal abuse, the minister went to the extent of accusing the network of having a pact with the opposition United National Party. He wanted the network to change its logo to the elephant symbol, (the party symbol of the opposition united national celebration) as the Tv network’s logo. He threatened the caller with legal action for questioning him on his integrity. What Aluthgamage failed to recognize is that as a people’s representative, he is answerable to the folks – in a genuine democracy. Is this a sign of the Government members panicking at the believed of an opposition victory where they could be brought to justice?

Like many members of the ruling party, there have been critical allegations of corruption levelled against Sri Lanka cricket and other sports bodies in Sri Lanka, that come below Minister Aluthgamage’s purview. Further, severe charges of soliciting sex from female cricket players were levelled at senior officials of Sri Lanka cricket. Investigations in to these have never ever noticed the light of day.

Aluthgamage’s behaviour is standard of the present political arrogance of the ruling party members. He went on to say that the existing government had issued the broadcast license to the Derena Television Network hence they must not entertain any criticism against the government or any of its members. What Aluthgamage have to be assuming is that broadcast frequencies of the nation are the

Private home of the ruling celebration. What a sad state of affairs for independent media.

It was certainly disgusting to see a supposedly educated member of parliament, who claims to be a solution of a single of the most major and distinguished schools in Colombo showing his arrogance and intimidating independent media, or supposedly independent media. However, the government of the day has managed to intimidate the entire media landscape in to submission. This is primarily since of the huge advertising budget that is controlled by the government, which belongs to the state lotteries board, state insurance coverage companies, banks, and other state advertisers. Further, they are also capable to control what goes on air in the private media by means of the intimidation of the corporate sector, thereby ensuring that criticism of the government is non-existent. Further, a number of journalists have been killed, numerous physically attacked and hundreds driven in to exile. The Sirasa Tv network and the Siyata Television network were set on fire, and up to date, no inquiry has been conducted and no a single has been arrested for the violence.

The tragedy with the Sri Lankan private media, particularly the electronic ones is that they are controlled by company interest’s that have enormous non media associated contracts with the government. Any criticism of the government or its representatives will spell disaster to their organization interests and state contracts.

The want for independent media is the priority of the hour that would not be controlled by other company interest. Successive governments blatantly manage the state media, which is supposed to be the public service media. Government stooges who have definitely no specialist experience or knowledge are employed to manage essential positions in these institutions. This ensures that only the state voice is heard and nothing at all else.

The blatant abuse of the Sri Lanka Broadcasting Corporation, the Sri Lanka Rupavahini Corporation and the independent Television Network by the government is a disgrace to broadcasting norms. The public tv networks are taken more than and employed as the ruling party’s network by appointing Government stooges as heads of these institutions. There are radio and tv programmes that abuse simple broadcasting ethics on a daily basis. In the Sri Lanka Broadcasting Corporations, the Chairman goes on air each and every morning and hurls abuse and filth on any person who has dared to criticize the government or its policies.  Nowhere in the globe, not even in the most despotic states would a chairman of a media institution go on air on a everyday basis, hurl abuse and use raw filth on a national network. Regretfully, no one has taken this up in the courts of law almost certainly being aware of the justice one particular would obtain from a flawed justice method.

As portion of President Rajapaksa’s election campaign, all heads of media intuitions who were part of his election campaign in 2010 have been re-appointed to take charge of the presidents 2015 election campaign. Their continual theme is foreign conspiracy, NGO dollars and traitors of the nation. Thus is the state of enterprise in the “Miracle of Asia”