“He chained my handcuffs to a chair so I couldn’t move. Attempted to remove my shalwar, I kept shouting and crying, but he was stronger than me. When he finished he went outside. A second official came to the area. He raped me as well. Second official smoked cigarettes and then with that burned my breasts, my inner thighs and legs. Both guys beat me. They bit my breast and my thighs. It was nevertheless dark when I was brought back to the police station the next day. The official who raped me first warned me not to inform anybody about this. They told me they would kill my husband. I began bleeding really heavily. I consider I was pregnant prior to the rape and miscarried. “ &#8211 An account by a victim of sexual violence and torture by Sri Lanka Safety Forces, We Will Teach You a Lesson, Sexual violence against Tamils by Sri Lankan Safety Forces, Human Rights Watch, February 2013.[i] 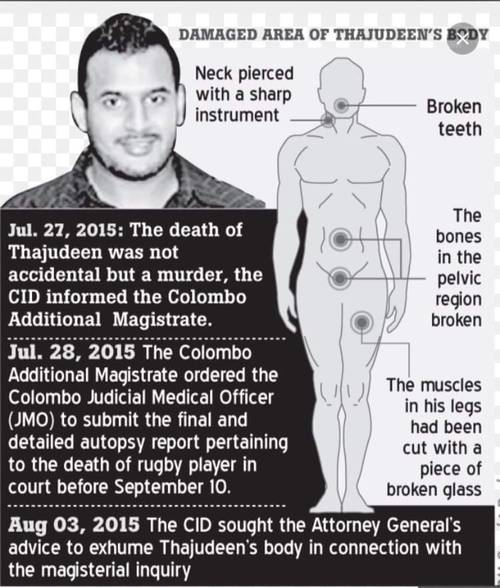 They even cite the undisclosed sources to graphically illustrate the final moments of the ruggerite.

The Sri Lankan media is so much obsessed with unravelling information of the former ruggerite Wasim Thajudeen’s murder. They even cite the undisclosed sources to graphically illustrate the final moments of the ruggerite. As per the Sri Lankan common English and Sinhala language primarily based media, Thajudeen had been abducted by a automobile belonged to Red Cross, but utilized by “Siriliya Saviya” a NGO run by Former initial lady Ms. Shiranthi Rajapaksa. It is reported that his teeth and pelvic bones had been broken, his ribs had been fractured, his neck had been pierced with a sharp instrument and the muscle tissues in his legs had been cut with a piece of broken glass. His physique showed that he had been assaulted by blunt instrument.

Why the police division didn’t disclose this in 2012? Why didn’t it take legal action primarily based on these findings? And now why they shamelessly inform us that there was a cover up? And why they have not taken any action against the officers who covered this up? Is this the only criminal case which had been “covered up” or any much more circumstances meted out the same fate? If so, how many circumstances the department has re-opened for investigation? How long will it take to arrest the perpetrators? How long will it take these alleged perpetrators to get the bail? And will our legal system provide the verdict with in our lifetime? And finally, will the perpetrators be punished or would be released citing lack of proof? And after they are released, will they say the whole legal action is an international conspiracy and eat kiribath or they will merely have a “bottle party” to celebrate their “Nidaahasa”? And to whom should I ask this question? To the IGP? Defence Secretary? Prime Minister? Or the President of Yahapalanaya? Properly! I have some more inquiries to ask and I really feel it is far better to ask them at the end of this write-up.

Suppose Wasim Thajudeen had been subjected to brutal torture at the hands of his assailants my dear fellow Sri Lankans, he was not the 1st 1 and definitely not the last one particular to meet this agony.

The report “We Will Teach You a Lesson, Sexual violence against Tamils by Sri Lankan Security Forces, released by Human Rights Watch clearly depicts that the torture and sexual violence on Tamils by the state’s security forces is not a summation of the isolated incidents by some rogue soldiers or officers, but it is a clearly drafted state policy and implemented by the glorified safety forces of the nation against Tamils, its own citizens. The safety establishments kept it an open secret and a routine practice so that even the females members of the safety forces assisted the rape and torture of Tamil detainees. [ii]

Though big number of minority Tamils were subjected to, the culture of torture and sexual violence and the impunity to the perpetrators in Sri Lanka started with the crackdown of the 1971 JVP rebellion. Still we hear the story of Premawathi Mannamperi who was tortured and murdered by the soldiers from threerd Gemunu watch, Ceylon Army. Again, she was not the only a single. The numbers are unknown. Following 4 decades, Sri Lanka was in the headlines of global news media for the rape, torture and murder of Isai Priya, by its security forces. Even so, the same common Sri Lankan news media, who still carry the story of Mannamperi, has shun away from informing the public about the gruesome fate meted out by this LTTE news anchor, almost certainly due the “Wise Patriotism”.

The newest report by the UK primarily based NGO Freedom from Torture (FFT) published this month, reveals that the practice of torture by the Sri Lankan safety forces continues even to date (that indicates even in ‘Yahapalanaya’) and the political leadership is well conscious of it.[iii]

In this final forty years of our country’s history, we have heard so several. Batalanda, Sooriyakanda, fourth floor of CID headquarters in Colombo, Matale mass grave website, Josep camp in Vavunia, Dehiwela, Kotahena,Chettikulam police stations, Veppankulam, Omanthai, Nelukulam army camps and countless accounts of the torture victims. However we have heard none of the members of the security forces brought into justice.

The essential cause why the state utilizes torture and sexual violence on its own folks is that state is well afraid of its own citizens. Take the Weliweriya massacres in August 2013. Why the military was deployed when the people agitating for the clean drinking water took it to the streets? Since the political leadership knows that masses can rise against the prevalent political culture of corruption and deceit. Regardless of the truth, that citizens are paying 11% (earlier 12%) of the worth of most of the goods and service they acquire as tax, the state offers little. 1 such instance is this article by Prof. Lasantha Pethiyagoda[iv]. The state is obliged to deliver the social welfare solutions to the masses. Nevertheless the high quality of public service is gone to the rock bottom and the frequent man (who is obviously poor) is frustrated by the service received from all the government institutions. Weliweriya is such instance. When the typical man of Weliweriya was denied of clean drinking water, he took the situation to the streets demanding his correct for. The then Rajapaksa government regarded as it as another mode of terrorism and sent its ‘Heroes’ and who in turn killed two college youngsters and an innocent family members man who had nothing at all to do with the protest.

The state was and is unbiased in enforcing its policy of torture and sexual violence own citizens regardless of the ethnicities. But, the Sri Lankan society has by no means raised its voice against it.

The political leadership of the country has raised the status of the security forces from soldiers to semi-gods. The Mahinda Rajapaksa regime was so keen in advertising the war victory to use it as a base to stay in the energy for decades. The regime did every thing in its capacity to continuously remind the masses outside the north and east about the ‘second freedom’. It had been completed by way of erecting war monuments, large hoardings, telecasting victory songs and above all the million rupee exhibition “Dayata Kirula”. The underlying concept of these efforts were to enhance the image of the soldiers as ‘liberators’ and, by means of that the Mahinda Rajapaksa loved ones as epic reincarnations of the legendary kings.

Since of this, any ‘smart patriot’ will in no way dare to raise his/her voice against the atrocities committed by these ‘semi-gods’ given that he/she would be branded as a traitor and a terrorist. As a result, I do not have any hope that the state’s policy of torture and sexual violence against its personal citizens will cease in the close to future, unless otherwise the Sri Lankan society wake up from its deep patriotic intoxication.

Now I ask my final inquiries.

Will the Police department find out the perpetrators of ‘White Van’ abductions? Will they say what happened to those ‘disappeared”? Will they arrest the assailants of Lassantha Wickrematunge? Will they arrest the abductors of Prageeth Ekneligoda? Will they locate the murderers of Raviraj &amp Maheswaran? Once again, Will the CID arrest these members of PSD who are alleged to commit the murder of Wasim Thajudeen? And ultimately, suppose these PSD members are sentenced by the court, Will our ‘Smart Patriots’ start off a campaign to free of charge those “War Heroes”?