Eight international organisations fighting for freedom of expression from Asia, the Americas and Europe wrote to the Minister of Foreign Affairs and Telecommunications, Mangala Samaraweera last evening to urge the minister to preserve his guarantee and defend freedom of expression on the web in Sri Lanka. 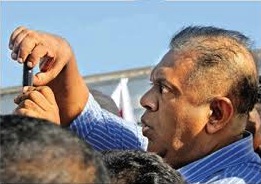 Back in February Foreign Minister Mangala Samaraweera rang the editor of  Colombo Telegraph to apologise for the covert and illegal ‘throttling’ of Colombo Telegraph website on the world wide web. Apparently, somebody in authority had decided to ignore the direct order of President Maithripala Sirisena to cease the blocking of the web site. Minister Samaraweera promised to hold a full investigation into who was responsible and to make a public statement but to date there’s been no progress.

Minister of Foreign Affairs and Telecommunications,

As supporters and defenders of freedom of expression rights, we request you, as Minister of Foreign Affairs and Telecommunications, to fulfil your guarantee to investigate the current illegal blocking of on the internet access to the Colombo Telegraph.

President Maithripala Sirisena gave a distinct order to lift direct on-line censorship of the news service as one particular of his 1st acts in energy. But as you know, a current technical investigation by the Colombo Telegraph and Danish authorities discovered a month later that the blocking had merely continued in a far more subtle, covert and illegal kind.

The source of the interference was traced to a server in the central workplace of Sri Lanka Telecom at the OTS Developing in Lotus Road, Colombo. We thank you for promptly calling the editor of the Colombo Telegraph on February 7 to “express regret” at the incident and promise an quick investigation with a public report to follow.

We are disappointed that there has considering that been no apparent progress with the investigation. The possibility that people within the Sri Lankan telecommunications sector could be illegally interfering with public access to news web sites with no legal authority is a single that issues us all.

Even though we disapprove of the practice, we note that sites can be “prohibited or be topic to supervision and control” under S.69 of the Sri Lanka Telecommunications Act 1991 – but only under ministerial authority, and under a publicly announced order. No such order was produced to replace the one particular lifted by President Sirisena.

With elections due, the media have to be cost-free to cover the upcoming campaigns without having fear of interference, covert or overt, on-line or off. A optimistic way of easing a certain threat is to complete your investigations and publish its conclusions this month, ahead of the elections take spot in August.

With thanks for your time, interest and commitment to date, Signed by the following international organisations

This message by e-mail, paper copy by delivery to the Ministry direct &amp by mail

Video: How SLT Blocking Colombo Telegraph At The CTO Creating

Click here to study the history of blocking Colombo Telegraph